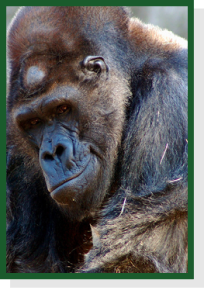 The One and Only Ivan is a work of fiction, but the inspiration for this imagined tale lies with a true story.

Ivan, a real gorilla, lived at Zoo Atlanta, but on the way to that happy ending, he spent almost three decades without seeing another of his own kind before being moved to Zoo Atlanta in 1994.

After being captured as in infant in what is now the Democratic Republic of the Congo (Ivan’s female companion, reported to have been his twin, died en route to the US or shortly thereafter), Ivan was raised in a home until he became unmanageable. At that point he was added to an odd collection of animals housed at a circus-themed mall in Washington state.

Ivan spent twenty-seven years of his life alone in a cage. Over time, as an understanding of primate needs and behavior grew, public discomfort with Ivan's lonely state grew as well, particularly after he was featured in a National Geographic special entitled "The Urban Gorilla." A public outcry followed, including heartfelt letters from children. When the mall where Ivan lived went bankrupt, he was placed on permanent loan to Zoo Atlanta, which houses the largest group of captive western lowland gorillas in the nation. 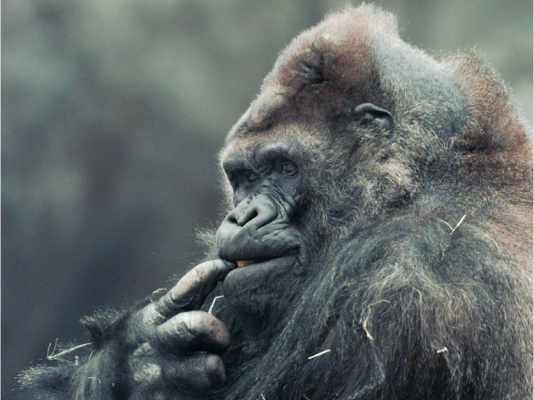 Ivan became a beloved celebrity at Zoo Atlanta, where he lived contentedly with other gorillas, although he never sired any offspring. He was known for his paintings, which were often "signed" with his thumbprint. Ivan died on August 20, 2012 at the age of 50.

Ivan and Kinyani were real gorillas — and so, by the way, was Jambo, whose story is recounted in the book. But all other characters and situations in the novel are entirely the product of my imagination. When I started to write about the grim facts of Ivan's solitary existence, a new tale slowly began to take shape. At least on the page, where anything is possible, I wanted to give Ivan (even while captive behind the walls of his tiny cage) a voice of his own and a story to tell.

I wanted to give him someone to protect, and the chance to be the mighty silverback he was always meant to be.